I have been reading After the Snow by S.D. Crockett.

While my short story, Deer, toyed with the idea of a new ice age, Crockett works through the implications and outcomes of such severe climate change. Her novel is set in a near future, in a Europe caught in the grip of snow and ice. The action focuses on teenager Willo. His father is a ‘straggler’ – a man who has chosen to live in the hills of Snowdonia, growing and trapping his own food rather than living in the city under the government’s harsh, restrictive regime.

Speaking in a slightly distorted English (Russell Hoban’s Ridley Walker seems to have had a lasting impact on dystopian narratives), Willo takes us on his journey from the day when he finds himself alone on the mountain – his father, stepmother and siblings having all disappeared.

The interest for Prehistories lies in the first section of the book, set in the mountains. Given the task of setting traps and catching wild animals for food, Willo has run half wild. He has stitched a dog’s skull to the hood of his jacket and talks to the dog as if it is his spirit guide.

Willo’s father, and possibly Crockett too, suggest that by communing with the dog spirit and by spending too long alone in the high mountains, Willo has become too wild, too much an animal. And yet the moral centre of the book lies with the people who are close to the land, who can survive by trapping and gathering food from the wild.

Willo has found a cave up on the mountain, past the “Big stones all sticking up out of the ground like teeth. All in a circle.” This cave is where he offers up the skulls and spirits of all the animals he’s caught and killed.

Deep in these caves lie a secret – a space filled with cave art. Willo takes a girl, Mary (who he’s saved from starvation) to see the pictures. Here she is describing the cave:

‘”There are hares- two hares standing up next to each other. There’s a goat like it’s been carved into the rock. And a deer, it’s got antlers, and a beast wi’ big hairy shoulders.” 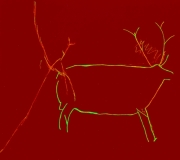 Willo describes ‘the sweep of the ceiling opening up in lines and smudges like it been a grassy plain alive with animals.’

Willo, and Crockett, are making a connection between the past and a future past. Through his connection with the landscape and his hunter-gatherer lifestyle, Willo has gained sympathy with the people who roamed the hills and mountains in prehistory.

The idea of future pasts in literature, of post-apocalyptic societies less technologically sophisticated than those who come before them, is something I’m keen to write about.

The focus of my interest is on Ridley Walker by Russell Hoban, Gay Hunter by J Leslie Mitchell (Lewis Grassic Gibbon) and  the Mortal Engines series by Philip Reeve, in which people and archaeologists are excavating the (sometime dangerous) technology of past societies. If you know of any other examples, please let me know.