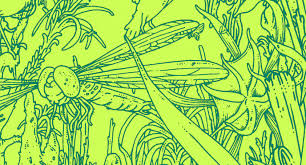 This book is aimed at teenagers, but there’s plenty in it for adults too.

Set in an alter-London, the thing that most caught my imagination was Miéville’s description of Wraithtown (where the ghosts of Un Lun Dun live).

“Each of the houses, halls, shops, factories, churches and temples was a core of brick, wood, concrete or whatever, surrounded by a wispy corona of earlier versions of itself. Every extension that had ever been built and knocked down, every smaller, squatter outline, every different design: all hung on to existence as spectres. Their insubstantial, colourless forms shimmered in and out of sight. Every building was cocooned in its older, dead selves.”

As an archaeology student I was taught to see these spectral buildings and landscapes – ancient field systems, hut circles, hillforts, deserted villages. While digging at Clava, Richard Bradley taught us to look at landscape in a new way; to peel away the modern – the Victorian grove of trees, the towering aqueduct – to see the shape of the land, the way it might have been in prehistory.

For archaeologists, sometimes, it is the wraith buildings and landscapes that form the solid core, while the modern world flickers in and out of view. 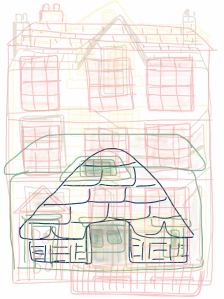 Dr A and I recently got our hands on an episode of the Stones of Blood – part of the Keys to Time series of Doctor Who featuring Tom Baker (broadcast 1978).

This has a cracking archaeology-themed storyline, which proves beyond doubt the animacy of archaeological remains.

The first two episodes are especially enjoyable. Filmed on location at the Rollright Stones, they feature a Druidic cult, a Celtic goddess, menacing corvids and two female prehistorians. What’s not to like?

I hate to give away a whole plotline, but it doesn’t take long to guess from their tendency to glow in the dark and their thirst for human blood, that there’s more to these standing stones than simple calcium carbonate.

While there’s a good deal of silliness in the episodes, there’s a good dose of atmosphere and horror too. The outfits and rituals are pretty effective and the sequence where two campers encounter the stones would have given me nightmares for days if I’d seen it when I was a child. Archaeologists – think twice before you pitch your tent too close to that stone circle…

The episodes draw on folklore relating to standing stones, name drops several genuine archaeologists and presumably draws inspiration from the pinnacle of archaeological TV drama Children of the Stones, which aired in 1977 and was filmed on location at Avebury.

Animism and animacy are topics archaeologists (including Dr A) have explored in recent years. The stones and rocks in the landscape around you now may not be randomly glowing or craving your blood, but people have recently been bombarded by beach pebbles, flung at their streets and houses by stormy seas. As the storms in SW England have demonstrated, the world around us is far from passive.

Read more about archaeology and science fiction on the blog here.

I’ve recently started working my way through the stack of China Miéville books that Dr A has been recommending to me for ages. I started on Railsea and moved on to the The City and the City.

Without intending to, I started with two of Miéville’s books to give a central role to archaeology. In Railsea (which I plan to blog about in the future) the archaeology is generally mostly viewed by people as salvage or treasure – to be dug up and traded or sold.

In The City and the City the archaeology is highly contentious – material evidence that can be used to challenge the delicate political situation between the cities of Besźel and Ul Qoma.

The story centers on a murder case, in which the victim has been murdered in one city and dumped in another. Another author might have written a straight political crime thriller, but Miéville is a science fiction author. In this story the two cities do not sit side by side, but occupy the same physical space. The citizens of each city can see each other, but are taught to “unsee” anything across the boundary. To deliberately look or move across the boundary (unless through the official border) is to bring down punishment from the elusive, powerful and Kafka-esque organisation “Breach”. Check out this imagining of the cities here.

Miéville clearly knows or has encountered archaeologists. One character is said to be “more interested in Foucault and Baudrillard than in Gordon Childe or in trowels.”

He is good too, in both Railsea and The City and the City, at creating alternative past material culture that are a warped version of those that exist in our own world.

“The few Precursor artefacts in alarmed and guarded bell jars that punctuate the passages are… specific but opaque. I glanced at some as I left: a sag-breasted Venus with a ridge where gears or a lever might sit; a crude metal wasp discoloured by centuries; a basalt die. Below each one a caption offered guesses.”

I don’t want to give away too much about the story, as the twists and turns to the plot (in true noir style) are key to your enjoyment of the story. Miéville’s work is well worth exploring. Next on my list, Embassytown.

Finally, check out this wonderful Cover to Cover project by Jenny Volvovski who designs new covers for each book she reads:

In my After the Snow post I mentioned my interest in literature discussing “future pasts”- that is societies less technologically advanced that those that preceded them. I’m especially interested in books, such as Ridley Walker by Russel Hoban and The Mortal Engines series by Philip Reeve, in which people, and archaeologists, are actively digging up past remains, searching for lost technologies.

Fresca sent me off to the library to look for A Canticle for Leibowitz by Walter M Miller Jr. Originally published in 1959, this book won the 1961 Hugo prize for literature, with its glimpse into a possible, post-apocalyptic future.

Set after a nuclear war, or the Deluge as it’s known, the story focuses on successive generations of monks whose job it has been to preserve and protect remaining documents that survived the “simplification” in which rulers, scientists, teachers and their books/ sources of knowledge had been destroyed by mobs who held them responsible for the nuclear war.

There is a great deal to be gleaned from the book, including its discussion of Church and State and the lessons to be learned (or not) from history. For more discussion of its major themes visit theSF and Fantasy Masterworks site.

In terms of archaeology and the unearthing of old knowledge, A Canticle for Leibowitz takes a familiar line in suggesting that stirring up the past can be a dangerous thing.

In one incident Boedullus, a monk and archaeologist, sends a letter to the abbot say they have found the site of an intercontinental launching pad. “His letter to the abbot was the last that anyone saw of the Venerable Boedullus, his party, his ‘launching pad’ site, and the small village which had grown up over that site; an interesting lake now graced the landscape where the village had been…”

The leader of the Plains tribes is deeply suspicious of archaeology. He notes how the academic passing through his lands spends “half of his time digging in the earth down by the dry riverbed and the other half jotting mysteriously in a small book. Obviously a witch, and probably not to be trusted.”

I especially enjoyed the depiction of the Abbey’s librarian “whose task in life was the preservation of books, the principle reason for the existence of books was that they might be preserved perpetually. Usage was secondary, to be avoided if possible.” Possibly there are some museum curators out there who feel the same way. 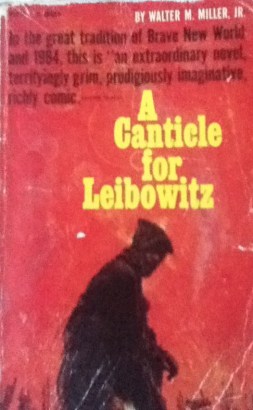 Miller’s humour is bone dry – understandable given the subject of the book and the impending threat of nuclear war at the time in which he was writing.

Next up in my ‘future past’ reading was Railsea by China  Miéville. Train tracks, giant moles, philosophies, alt-salvage…

But that’s a whole different story…