I specialise in archaeological illustration, which is about recording and presenting archaeology visually. I do everything from measured drawings of artefacts, monuments, and entire sites to reconstruction paintings showing how places, people and things used to look like in the past. Some of my illustrations end up in specialist archaeological publications and site reports, others – like my archaeological comics – end up in museums, guidebooks and magazines.

I was always interested in archaeology, even when I was really young. I used to make Egyptian tombs in the garden, fill them with mummies, pots and pieces of furniture I’d made, and leave them for months at a time before digging them up again. I suppose actually becoming an archaeologist was inevitable after that! When I went to University, I realised that archaeology was actually as much about understanding the present as it was understanding the past. If you understand the way archaeology pieces together the past, you realise you’re also able to understand those same things in the present:  politics, economics, culture, history, art, etc.

Mortimer Wheeler. He created the kind of public archaeology we know today, and helped us recognise that the past matters to everyone, not just to archaeologists. Without him, we’d have no Time Team, no Discovery Channel, and Jorvik Centre. I think he’d be fascinated by the way public understanding of archaeology has changed over the years, and despite all archaeology’s problems, be extremely encouraged by the number of people who are interested in the past and who value it.

Trowel, definitely. Archaeology is about studying the past through the bits and pieces left behind. Without a trowel, nothing would end up in museums, archives or libraries. Knowing how, where, when and why to excavate is the beginning of all good archaeology.

Time is not kind to a lot of ordinary materials. Organic materials such as wood, textile, string, leather and skin survive only in particular conditions – like the clothing on the Ice Man preserved in the ice and cold of the Alps, for example, or the skin and hair preserved on bog bodies in peat deposits. Occasionally, you get place like Akrotiri, Pompeii or Herculaneum where natural events like volcanoes preserve the imprints of objects like wooden chairs or loaves of bread. A “dream find” for me would be an entire site from a distant period like the Neolithic preserved in such a way. Imagine all the wooden objects, all the textiles, all the furs and skins that you would be able to recover from some sort of Neolithic Pompeii. I think finding a site like that would be truly astonishing, and quite probably make us think about periods like the Neolithic very differently.

Oh yes, absolutely. So much of the ordinary experience of even the recent past is very quickly forgotten. I grew up in a time without computers, without mobile phones, without the internet – and even I have trouble remembering what that was like. I think time-travel to even a very recent era in the past – say the 1980s – would radically alter the way we think about it. You’d be very quickly made aware of all those ordinary everyday details which don’t make it into the archaeological or historical record. Imagine what time-travel would do for our understanding of the very distant past. Of course, it might put archaeologists out of a job…

This is such an unfair question! How can you possibly pick one era out of the whole of human history! I’d want to go back and see what all the places I’ve ever worked in were like in the past: the Sudan during the Meroitic period, the Cistercian monastery of Bordesley Abbey in the thirteenth century, the riverside settlements along the Danube at the end of the Mesolithic, or the Roman marching camps along the Antonine Wall. An impossible choice! But if I absolutely had to pick one era, it would be the Neolithic in Anatolia (Central Turkey, c. 5,000BC). I worked for many years at the site of Catalhoyuk, which is a Neolithic site in Anatolia. This was the time that people were inventing the whole idea of not being hunter-gatherers and settling down into permanent communities. So much of what we take for granted as part of the modern world – villages, towns, professions, trades, government, religion, borders, etc. – started at sites like Catalhoyuk. Seeing these ideas first being tried out, and knowing what later generations would do with these ideas would be really interesting.

When I was learning to read, I couldn’t get enough of the Ladybird books on history and archaeology. The pictures in the books – particularly the paintings by a man named John T. Kenney – made the past seem genuinely alive. I know this is one of the things that made me interested in trying to do illustrations and paintings of the past myself.

At the moment I’m working on four very different archaeological comics. The first is an educational comic for a museum in California, all about the native peoples that lived on the California coast and left these huge mounds of discarded clam-shells behind. The second is a graphic article about late ceramics in northwestern Mexico – this is going to be published in a specialist archaeology journal in the US. The third is a fictional web-comic about future archaeologists working on the moon, and will be published online later this year. The last project is one I’m working on with Dr H! It’s a graphic short story written by Dr H and illustrated by me. It’s about a girl during the Late Neolithic, and is set around the sites of Skara Brae and Stenness on Orkney. It’s called “One Girl Goes Hunting”, and we’re not sure when it’ll be published, but hopefully early next year. 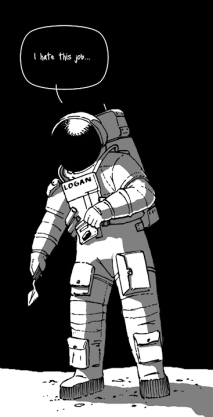